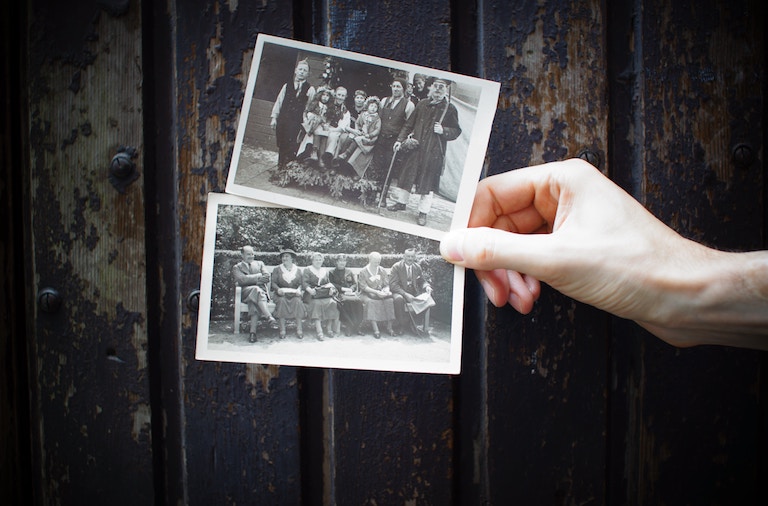 The abundance of history surrounding the Hauraki Rail Trail is there for everyone to enjoy along this unique Trail.  From heritage towns and buildings, Captain Cook’s landing, concrete cyanide tank remains, the 1100-metre long railway tunnel, a vintage Railway, to the modern day working Martha Mine.

Journey along one of New Zealand’s oldest railway corridors. Dating back to 1898, the Trail travels through some of New Zealand's most beautiful countryside and townships steeped in history.  Wherever you look there are reminders of the past, with each Section of Trail offering diverse landscapes, unique artefacts and stories.

We’ve put together a list of historical highlights, so whether you’re intending to ride the entire Trail across 4-5 days, or choose a Section to enjoy across a day, there’s plenty to see and learn about for history buffs and lovers of yesteryear.

Named ‘The Journey of Te Aho’, this section of trail along the Firth of Thames follows in the footsteps of an early Māori settler, Te Aho.  The Firth of Thames was so named by Captain James Cook in November 1769. The Firth is an important site for shorebirds, and is listed as a wetland of international importance under the Ramsar Convention.

Visit the memorial site of Captain Cooks landing, situated on the western bank of the Waihou River. A three tonne steel ship’s anchor donated by the Royal Navy of New Zealand serves as a symbolic recognition of the exploits of Captain James Cook on his voyage of discovery in the Coromandel Hauraki area in November 1769.

With his ship Endeavour anchored 14 nautical miles away from Thames, this was the longest trip Cook ever took from the Endeavour, rowing two long boats out of the shallow river mouth and into the deeper fresh water.

Thames is rich in gold and kauri history, and museums, stamper batteries and heritage experiences are plentiful.  The largest town in the region, Thames reveals its stories through the prevalence of heritage buildings and museums.

Excellent guided tours are available at the Thames School of Mines, with an authentic underground Goldmine Experience at the Thames Stamper Battery.  Conclude your exploration of Thames above ground by visiting the working scale models and engineering marvels at Bella Street Pump House.

Colour coded and given names by which the areas were known in the Goldfield Era from 1867, they take in historic buildings, reserves, natural beauty spots and cemeteries.  These walks accompany the information contained in this handy downloadable pamphlet. 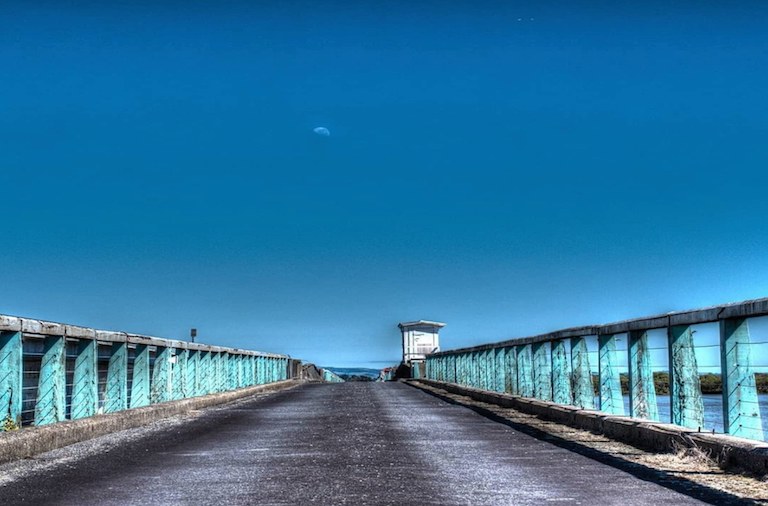 The Māori people believed that the deep valleys cutting through the Coromandel Ranges were carved by the thrashing tail of a taniwha.

This is also the place where bushmen, gum-diggers and gold miners sought their fortunes, routinely crossing over to the eastern side of the ranges on rugged bush tracks through forests of mighty Kauri.

It is amidst this history that this section of trail begins, at first following the old railway line out of Thames town and onward through lush farmland with the impressive ranges a constant companion to the east.

As New Zealand’s only inland port, the Museum has significant links dating back to pre-European settlement and the arrival of Captain James Cook in 1769 aboard HMS Endeavour.

The port was the main catalyst in the expansion of the Waihi gold mines prior to the introduction of the railway in 1905.  This important collection of Maritime history relates to the role Paeroa played as a port for unloading mining machinery and equipment in the late 19th century.

The Park has received a $1.1 million development fund and Stage one includes an upgrade of Wharf St in Paeroa, which will link to a purpose-built community jetty on the Ohinemuri River.  There will be pontoons, a boardwalk and new riverboat to ferry people and bikes between the Maritime Park and Wharf St.

The most popular section of the Trail follows the Ohinemuri River through the dramatic Karangahake Gorge.  A deep canyon cut through the Kaimai Ranges.  This distinctly different  landscape includes gold mining sites, the Victoria Battery museum, Windows Walkway and an amazing 1100-metre long railway tunnel. 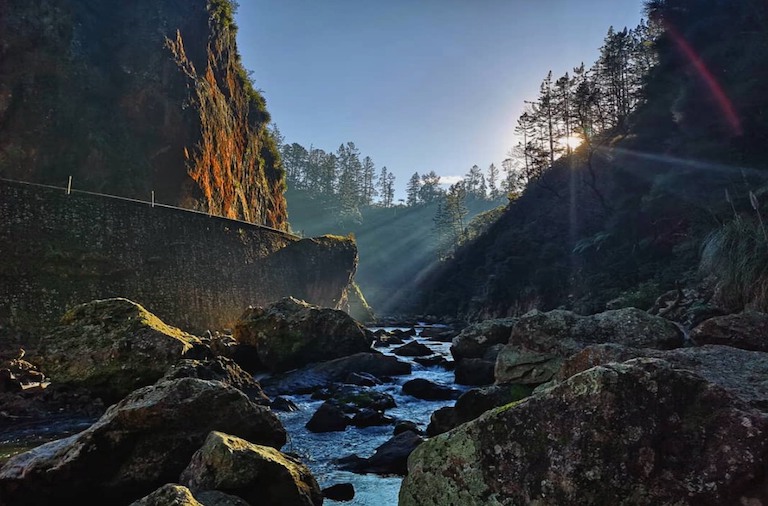 Concrete cyanide tank stands reminiscent of ancient ruins are among the remains of the Victoria Battery at Waikino.  Constructed on the south bank of the Ohinemuri River, it’s easily accessible from the Hauraki Rail Trail.

The Battery was constructed by the Waihi Goldmining Company from 1897 to crush ore from the Martha Mine.  Drawn by steam locomotives, 40 skip wagons each loaded with one tonne of quartz ore were hauled to the Battery site.  There would be 14 trains daily.

Once completed, the Battery with 200 stamps was the largest quartz crushing plant for gold extraction in Australasia.  The Martha Mine closed in 1952, however work continued at the Battery until 1955 when buildings and machinery were dismantled.

The ruins of the Battery are now managed by the Department of Conservation, and the site is a feature on the Karangahake Historic Walkway.  The loop walk starts and finishes at the Waikino Railway Station and takes about 1 hour. 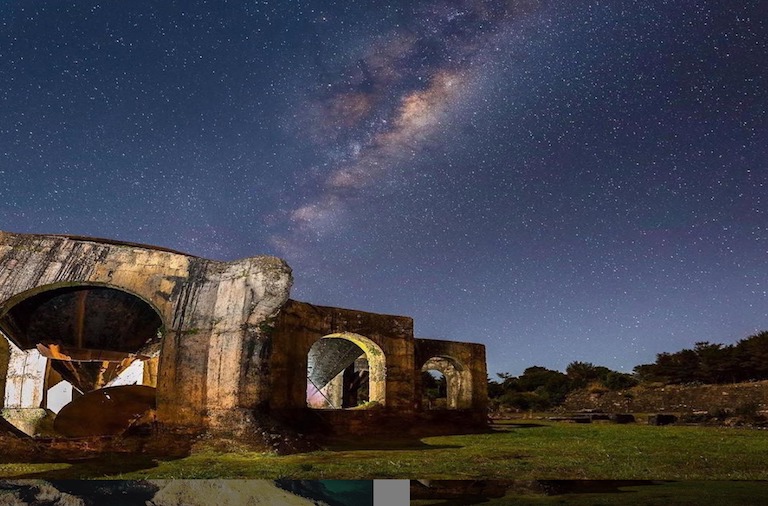 This lovely walk starts in the Karangahake Gorge carpark area and is about an hour round trip.  Along the track visitors can observe relics of the many processes that took place in extracting gold.  From the tunnels where rock was extracted, to the roasting pits where the rock was broken down, and remnants of the huge stamper battery processing plant.

The Karangahake Gorge Historic Walkway follows the old Paeroa to Waihi railway line, with the remainder of the track following the banks of the Ohinemuri River.  Old mine buildings, machinery, walkways and tunnels tell stories of a rich mining history.

Situated between Paeroa and Waihi, the walkway is serviced by four carparks, located at the Waikino Visitor Centre, Waitawheta Road, Karangahake Reserve and Crown Hill Road.  The walk is 7km and incorporates a 2km loop section.

Goldfields Railway Incorporated was established in 1980 to preserve the rail heritage of the local area.  The popular tourist railway between Waihi and Waikino, caters for history buffs, railway enthusiasts and visitors to the Hauraki Rail Trail.

The 30 minute nostalgic journey takes passengers through to Waikino at the eastern end of the spectacular Karangahake Gorge.  With its links to the local Mining Industry, Goldfields Railway offers a unique experience to learn about the area’s history. 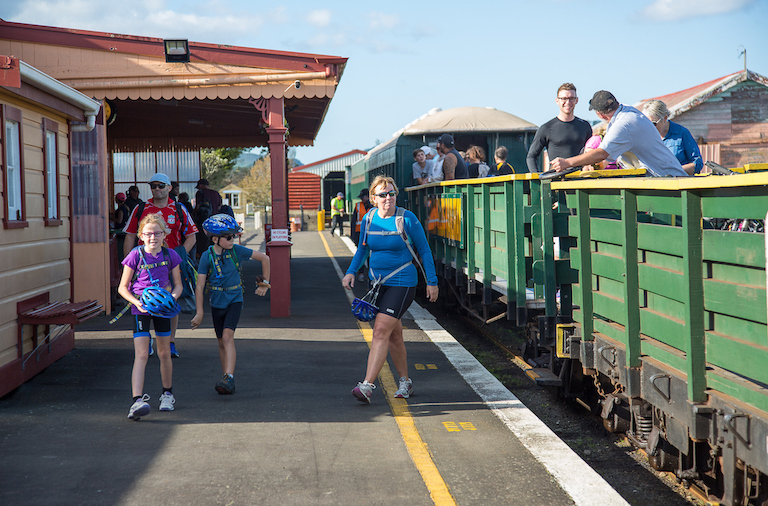 Waihi Station is the only ex New Zealand Railway site in New Zealand that still contains its original buildings.  Today the buildings are classified as Category II by the New Zealand Historic Places Trust.

Following the expansion of the Martha Mine, Waihi in the 1900s was one of the largest boroughs in the country.  Today passengers can travel the remaining 6.5km of what was the original Eastern Main Trunk Line to Waikino.  This line stretched from Auckland to Taneatua south of Te Puke.

Waihi is a picturesque heritage town and New Zealand's 'Heart of Gold', with a gold mining history spanning three centuries and a local open-pit mine that is still fully operational.  Visit the Gold Discovery Centre for an interactive experience which makes the gold heritage come alive. Then wander across the street to view Martha Mine up close, and take the tour to experience a modern working gold mine in action.

This is an easy but spectacular walk which begins at the Cornish Pumphouse and rises gently to the edge of the open pit for the overwhelming view down into the vast chasm.  The wide gravel path continues West on an easy gradient around to the highest point on the North wall where the view is breathtaking.  Interpretative signs offer interesting facts about Martha Mine as you complete the 4km loop back to the Pumphouse.

The Cornish Pumphouse was built around 1904, from a design used in the tin mines of Cornwall, England.  The structure housed the steam engines and pumping machinery.  The pump was used until 1913 when the Waihi Gold Mining Company completed the first hydro electric power station on the Waikato River.  Today the remains of the Pumphouse are protected by the Historic Places Trust and the building is a Waihi landmark. 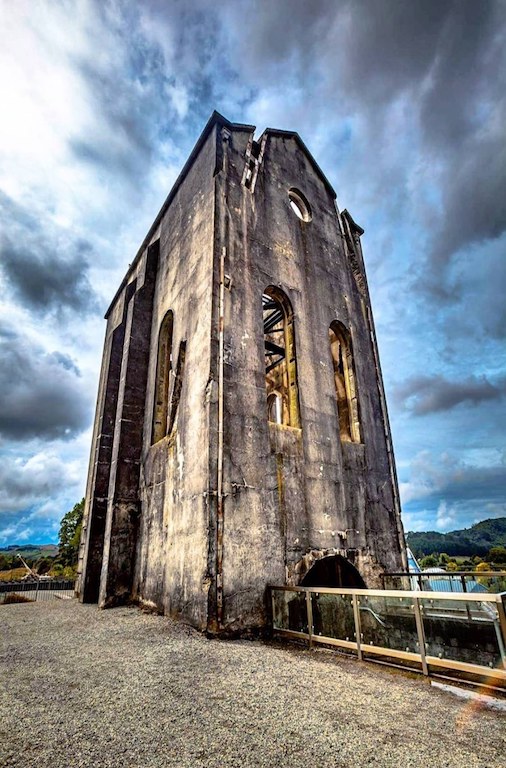 The Waihi Museum operates as a place for the collection, display and preservation of items of historical interest to the Waihi District, particularly items relating to the underground mining history of the area.  Gold was first discovered in Waihi in 1878 and by 1905 Waihi not only possessed the most productive gold mine in New Zealand, but was the largest gold mining town in the country and the third largest inland town in New Zealand. There are several rooms devoted to mining and the social history of the town.

Te Aroha was officially born with the opening of the Waiorongomai Goldfields in 1880.  It became the first geothermal spa town to annually receive thousands of visitors, many traveling by boat and train to ‘take the waters’.  The Te Aroha Hot Springs & Domain is unique in that it is the only complete Edwardian Domain in New Zealand.

When gold was discovered in the Waiorongomai Valley on the eastern slopes of Mt Te Aroha by Hone Wharehiko it attracted so many prospectors, the valley became the scene of large scale gold mining activities. Initially, the town developed rapidly as vast amounts of capital were poured into the area.

Pick up a brochure from Te Aroha i-SITE and follow the trail through various phases of history from the booming Edwardian Spa era through to Art Deco.  At 952m Mount Te Aroha is the highest point in the Kaimai Mamaku Forest Park and is part of an ancient volcanic chain, gaining its name in Maori legend.

The Firth Tower was built in 1882 by Josiah Clifton Firth to provide a lookout over the countryside.  Previously used as the estate office and sleeping quarters for single men, the tower stands on rising ground commanding extensive views. Visitors can enjoy the tranquil gardens, picnic under venerable oaks and explore the museum displays housed across 13 buildings.

The Hauraki Rail Trail showcases the best of New Zealand’s landscape, environment, culture and heritage.  No matter how far you want to ride, if you’re ready for an adventure there’s a great option for every rider.