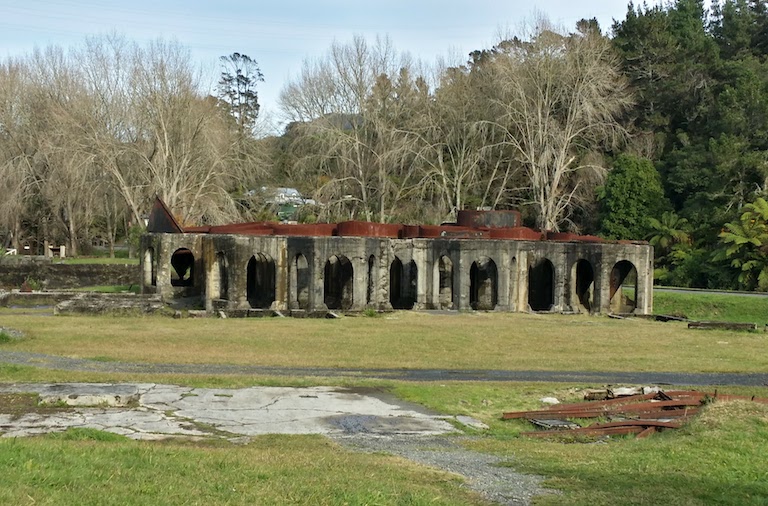 Breathing Life Into Victoria Battery On The Hauraki Rail Trail

Concrete cyanide tank stands reminiscent of ancient ruins are among the remains of the Victoria Battery at Waikino.  Constructed on the south bank of the Ohinemuri River, it’s easily accessible from the Hauraki Rail Trail.  The site got its name from the Victoria Rock, located between Waihi and Waikino, which resembles the profile of Queen Victoria.

The Battery was constructed by the Waihi Goldmining Company from 1897 to crush ore from the Martha Mine.  Drawn by steam locomotives, 40 skip wagons each loaded with one tonne of quartz ore were hauled to the Battery site.  There would be 14 trains daily.

The site was selected due to the availability of cheap hydro power from the Rivers.  After the ore was crushed to a pulp by stamper batteries, it was fed into the huge tanks containing a solution of potassium cyanide and water to dissolve the gold.  The gold was recovered after the solution was run through extractor boxes containing zinc shavings.

Once completed, the Battery with 200 stamps was the largest quartz crushing plant for gold extraction in Australasia.  It was capable of crushing over 812 tonnes of ore each day to the consistency of sand.  About 200 people on average, were employed at the Battery whilst in operation.

The Martha Mine closed in 1952, however work continued at the Battery until 1955 when buildings and machinery were dismantled.  The ruins of the Battery are now managed by the Department of Conservation, and the site is a feature on the Karangahake Historic Walkway.

The Victoria Battery can be found on Section C of the Hauraki Rail Trail.  This section takes cyclists through the picturesque Karangahake Gorge, with its historic mining relics, bush clad mountains and through a 1km railway tunnel.  It can be entered at Paeroa, Karangahake, Waikino and Waihi and is a Grade 1-2 (Easy) trail.

Starting at Karangahake Gorge carpark, this ride takes you through the Karangahake Tunnel.  The trail winds its way along the edge of the Waitewheta River, offering some of the best scenery of the journey.  The track is flat, and the terrain easy.

Cool off at Owharoa Falls with a swim in the crystal clear fresh water.  Indulge your appetite at Falls Retreat amidst the trees, or in the rustic restaurant.  The trail continues along Karangahake Gorge Historic Walkway, and through the Victoria Battery.

Riders can take the steam engine from Waikino Station on to Waihi.  Waihi has a mining history of over 100 years, with a gold mine still in operation in the town which offers scenic tours.  You can view and download the map here.