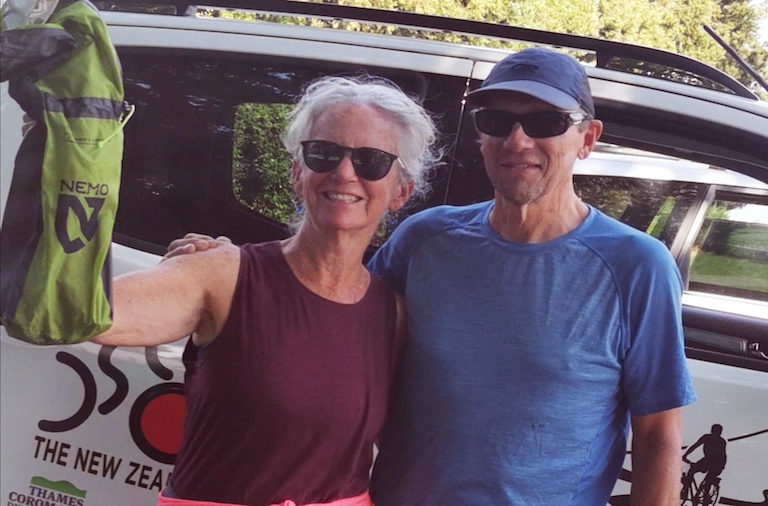 Lost & Found On The Rail Trail

Recently retired Glen Goodnough and Pam Griffen from Maine USA, are cycling New Zealand following the Tour Aotearoa Route. They heard about the trail which stretches from Cape Reinga to Bluff from others who had recently completed the journey, whilst bike-packing in the USA.

Travelling light, they packed up all they needed for their 9 month long sojourn.  Their first night on the Hauraki Rail Trail which is part of the TA route would be the Miranda Holiday Park at the northern end of the trail.  Less than 10kms into their ride, their all essential bag of tent pegs and poles jettisoned off the back of a bike.

Riding oblivious to the loss southwards, the Hauraki Rail Trail team was also starting its annual Warrant of Fitness.  The team found the bright green bag of pegs and poles, and having no idea which direction the cyclists were heading, a photo was quickly Posted on Facebook, in hope the hapless cyclists would be reunited with their belongings.

Later that day Pam and Glen arrived at Te Aroha Holiday Park, only to find their tent was now just a sheet without poles.  Convinced they must have left it at Miranda Holiday Park, they telephoned.  No bag, but wait… someone vaguely remembered seeing a Post on the Hauraki Rail Trail Facebook Page earlier in the day.  Sure enough, it was Pam and Glens.

The only problem now was the bag was at Aongatete, on the opposite side of the Kaimai Ranges.  The Trail CEO had taken the bag with her in case someone claimed it.  Much later that afternoon, Pam and Glen were happily reunited with their poles and pegs, along with a delicious Christmas cake which had somehow made its way into the bag.

We caught up with Pam and Glen to hear all about their adventure (and adversity) on the Rail Trail.

A    We are Pam Griffin and Glen Goodnough, and we are from the United States.

Q    What was the reason behind your adventure on the Hauraki Rail Trail?

A    We are on a 9 month bicycle tour which started in Canada.  We biked to Mexico and then hopped on a plane (with our bikes), and flew to Auckland.  We are biking to Bluff following the Tour Aotearoa route (more or less), and trying to hit as many of the off road trails as possible.

Q    Which Sections did you ride, and do you have a favourite?

A    We took the Hauraki Rail Trail from Miranda to Te Aroha.  It was one of the best rides ever!  It was beautiful countryside with mountains and farms.  The shorebirds were unforgettable.  On top of that we had a tail wind the whole day.

Q    What memory or experience on the Trail will stay with you most?

A    Perhaps our best memory is the fact Diane Drummond (the Trail's CEO) drove an hour on a Saturday to deliver our tentpoles.  The bag was dropped on the trail and we didn’t realise this until we got to Te Aroha.  We even got a delicious Hauraki Rail Trail Christmas cake!

Q    What is it for you that makes the Hauraki Rail Trail unique?

A    We also met a rider from France and Namibia, and we all ended up in the same campsite. We were all biking the entire country and exchanged very useful information about the Trail and biking in new Zealand.

Q    What advice would you give to others planning to ride the Trail?

Q    Where are you hoping to adventure next?

A    We are headed to the Timber Trail and beyond.  We are both really looking forward to the south island.