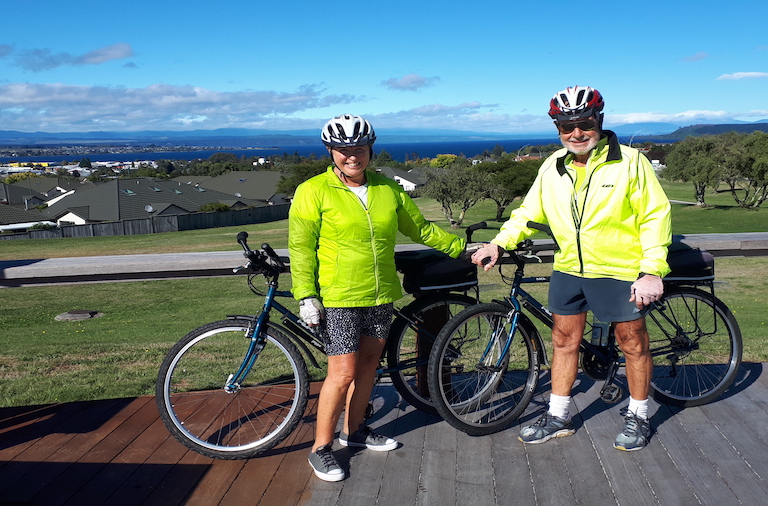 John and Kate Driver describe themselves as Sailors who love to Bike. They have pushed past their comfort zone over the years, mostly through John’s thirst for adventure and inspirations, with Kate as facilitator. After 40 years together, this combination led the duo to spend a year living out of bike saddlebags and a two person MacPac tent.

The couple now often travel in the comfort of their caravan, and as they are Tauranga based, the pleasure of riding the Hauraki Rail Trail is always part their outward or return leg.

Every adventure includes their 30 year old trusty Avanti Montari Mountain Bikes. The bikes are an essential part of their travels, with thanks to John’s bike mechanic skills keeping the cycles in tip-top condition.

Over 30 years, Kate and John have clocked up an impressive 70,000 kms adventuring around the world. This has included the south of England, France, Spain, Switzerland, and in the last few years the Netherlands. You can hear more about their global jaunts at the end of the feature. 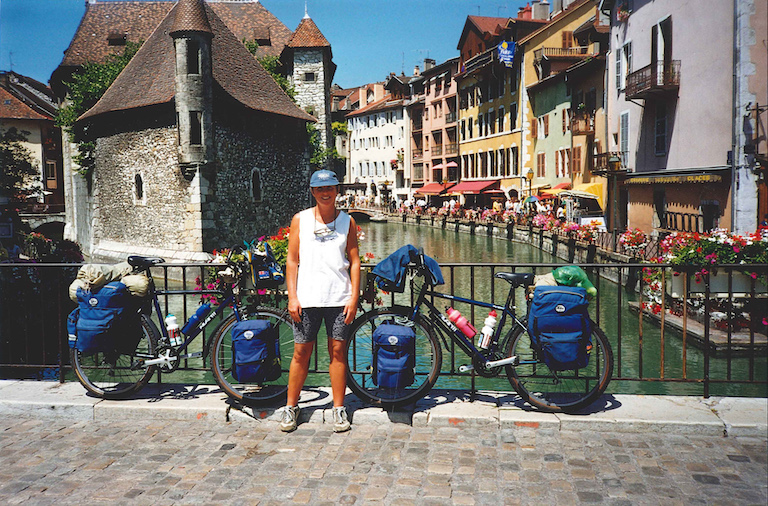 We asked Kate and John to tell us about their time on the Hauraki Rail Trail, how it compares to other Great Rides they’ve ridden, and offer a few Trail Tips for when you next explore the Trail.

How much of the Hauraki Rail Trail did you ride, and what aspect of the journey did you enjoy most?

Because we had some recent visits to make, we made a point of doing some riding on the trail again from Te Aroha to Thames on a lovely, light tailwind morning. Although it’s pretty flat and straight, there’s lots to look at, and we loved the information boards.

It’s amazing to realise how busy these little places were, and how important the railway was before cars and trucks. We loved the info about the Puriri Railway Station, and even met a chap who shared his memories of riding the railway as a boy.

We also rode from Thames to Paeroa on a blustery, threatening showery morning, yet all made good with a great tailwind. On this side of the Karangahake Gorge, you need to get your wind direction right! It adds immeasurably to the ride.

Our last stop was a favourite caravan overnight at the Waihi Railway Station, which we highly recommend as it’s quiet and also offers power. We stayed an extra night and took the opportunity to ride the kilometre or so into Waihi, and around the rim of the old Martha Mine with its terrific views. 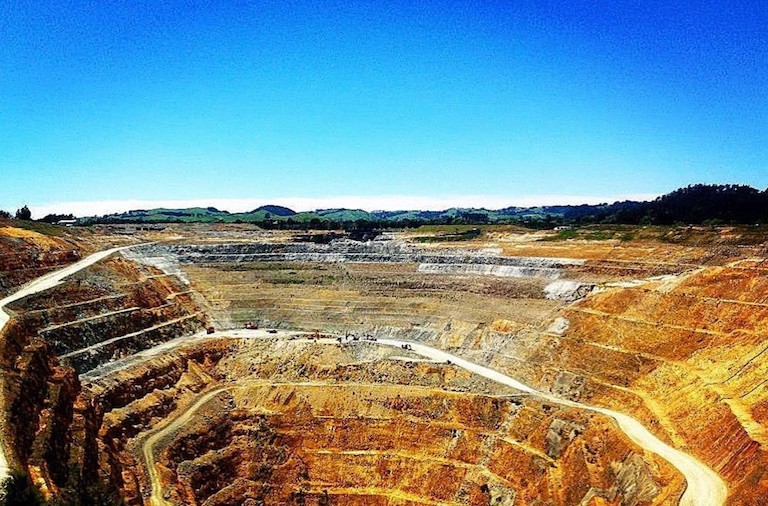 How does the Rail Trail compare to other Great Rides you have experienced in New Zealand?

They are all ‘unique’ in our experience, but for us the Rail Trail probably compares closest to the Otago Central Rail Trail in terms of terrain. Otago has Clyde, Alexandra, Ranfurly, and Middlemarch, with some quaint villages en-route, such as Lauder and St Bathans which offer a very special landscape of the distant mountains. Our next favourite place to ride is Napier, with its beautiful trails on the top of stop-banks and the coastal ride too.

Hauraki Rail Trail is very versatile, and has historically interesting towns that share the gold-mining experience with Otago. Waihi, Thames, Paeroa, Te Aroha and the dramatic Karangahake Gorge make for a very special ride, and much more accessible given the populations in Auckland and Tauranga.

We love the additional special treat of a working railway and vintage train ride to fit into an itinerary. The Trail is user friendly too, with easy car access at various points so you can adjust the distance of a ride. The recent trail repairs have been great, and cater to a wide variety of riders. Just as some of us have a lot of experience, it’s a great Trail for people new to recreational riding, with the distances and terrain very manageable. 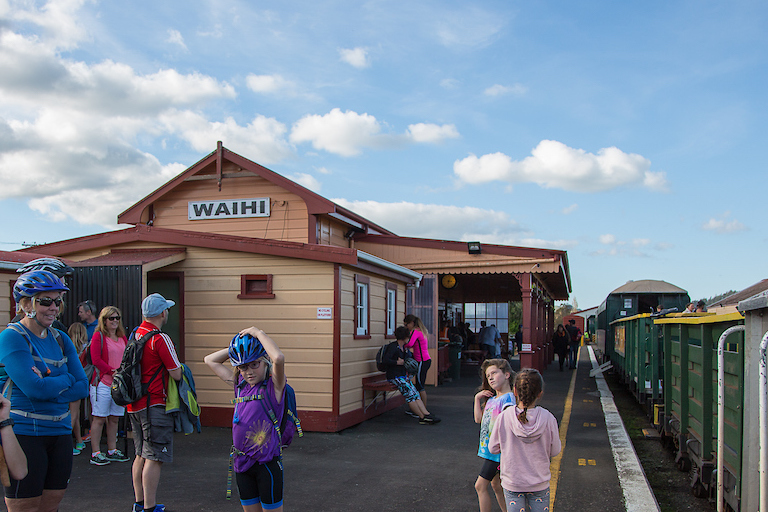 Where are you hoping to adventure next?

In May we are going back to cycling and exploring in the Netherlands. We are fortunate to experience such a contrast in the culture of cycling. There, it is a way of life, with an amazing infrastructure that helps keep a large population of more bikes than cars freely moving in a relatively small space. Here in New Zealand it is the opposite, with mostly recreational riding places and spaces being used as a drawcard. Next summer, it will be time for us to explore the South Island again.

When riding the Hauraki Rail Trail, what was your Best Decision?

We were delayed half a day with trail surface repairs, and so we took the Goldfields Railway vintage train from Waihi to Waikino. It was terrific fun thanks to the great driver/guard team, and would break up the day for younger ones. There’s also great coffee and food at the Waikino Station Cafe, and we met others who raved about their lunch at the Waikino Hotel Bar & Kitchen.

When riding the Hauraki Rail Trail, what was your Biggest Lesson?

Keep an eye on the wind direction and forecast velocity on the Hauraki Plains, and use it to your advantage.

When riding the Hauraki Rail Trail, what was your Favourite Section?

It has to be from Waihi to Paeroa, riding beside the lovely river and trees. The Gorge is so spectacular you almost forget about the road opposite, and the history all around you. 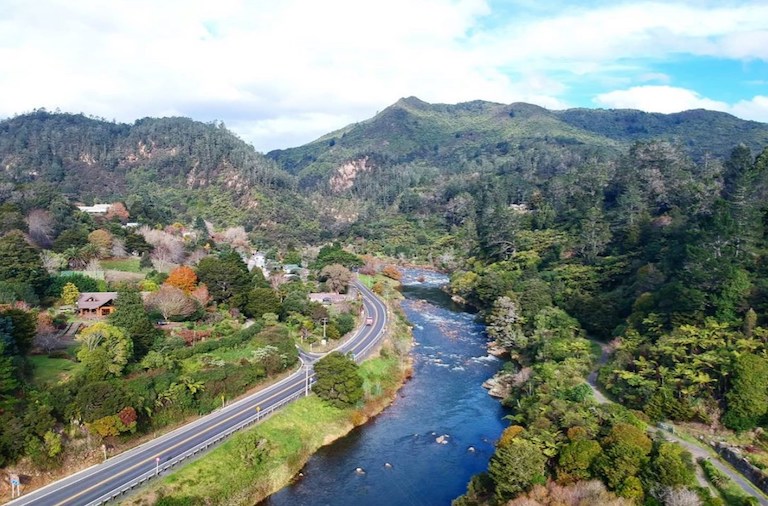 Stop for a bite at … Everywhere! Share the love and spread the support in this current climate!

Add on … A ride around the rim of the Martha Mine.

Don’t miss … Some of the beautiful old buildings at the northern end of Thames, and the terrific SteamPunk style sculptures in Te Aroha, and take the Waihi to Waikino Vintage Train.

Ride further to … Explore Kaiaua and the Shorebird Coast. It’s such a lovely ride.

Remember to pack … Clothes that layer and wind/showerproof jackets.

A special plea from Kate … If you want to overtake, or are coming up behind walkers, please remember to ring your bell! 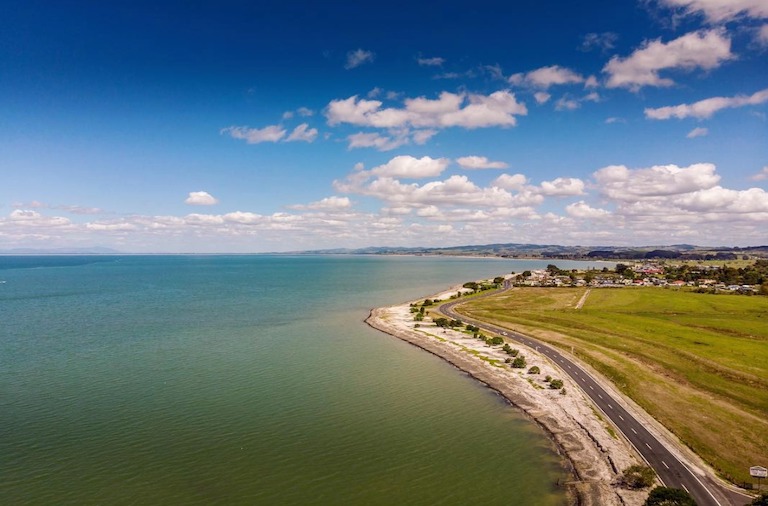 Photo Credit: @carl.farthing on Instagram - Kaiaua and the Shorebird Coast

Our New Zealand ‘end to end’ and return to the Bay of Islands over 5 months in 1994/95, saw us ride over every South Island mountain pass. Lewis (EtoW), Otira (WtoE), Porters (WtoE), Burkes (EtoW), Lindis (NtoS), and Haast (EtoW). Truly memorable days such as 90 Mile Beach on a descending tide, Mangatoa Road from Marakopa to Awakino, down the Kaikoura Coast from Blenheim, down the Haast Pass from Hawea (not up as so many do!), and the Golden Downs Road from St Arnaud.

We loved it so much, we decided to embark on a rather late Overseas Experience in Europe. John’s overseas trips were always previously by yacht, and this was my first.

We naively intended a UK Land’s End to John O’Groats ride, with a warmup of a few weeks sampling France. We rode the back roads along the South Downs from Kent to the ferry in Southampton in April 1998, freezing beneath the grey skies, behind tall hedgerows, dodging the fast, belligerent traffic.

When the ferry dropped us in the midst of all the history of France’s Normandy Beaches, the sun came out and we instantly found cycle heaven. The French ‘D’ roads took us along interesting coastlines, through beautiful countryside with gorgeous, characterful villages every 20kms or less.

We received warm welcomes everywhere, and instead of being a nuisance on the road as we have experienced in NZ, there was an amazing respect and camaraderie. We found ourselves embraced in a real cycling culture, enhanced by daily baguettes, divine pastries and seriously good and cheap Vin du Pays. This was us!

There was no going back to the crowded UK. Our route after Normandy was down through the middle of France to Bordeaux, with rides of 70-100kms a day depending on the terrain. Then into the Spanish Pyrenees from the Atlantic coast to the Mediterranean, with every obscure mountain pass road sealed. The Pyrenees were very remote in their phone box free 1998 world, a good 10 years before mobile phones.

After three weeks of tiny switchback mountain roads, we came down the exceptional Mont Louis Pass to the Mediterranean Coast and cycled to Nîmes, then north again to the Rhone River and near Lyons, and west into the mountains to Lac d’annecy (100kms from Mt Blanc and Lake Geneva). It was a month in paradise, cycling and paragliding.

We had to drag ourselves away, but were happy enough once we were wending our way through the Alps and gorges to circumnavigate Lake Geneva. Then over the mountains back into France.

We followed the beautiful countryside adjacent to the Loire River back across France in wonderful late summer weather, watching the harvesting, stopping off in the bigger cities, Orleans and Chartres. It was wonderful seeing the spire from 50kms away and watching it get bigger as we got closer to this amazing structure.

We weren’t brave enough for Paris by bike, so instead we turned to the coast and saw more of what makes France so poignant at the beautiful battlefields around the Somme. As in Normandy, it all seems so surreal, but respect and dignity for the huge sacrifice is felt across France, Belgium and the Netherlands, and never fails to move us as we absorb so much by bike.

In the Netherlands, cycling is part and parcel of life. We have fold-up bikes on our boat, and they simply get handed down on to the dock, unfolded, panniers attached, and we join thousands of all ages. We ride to the supermarket, out into the country, crossing the waterways by car/bike ferry to do a circuit, or meet friends for coffee and apple cake. 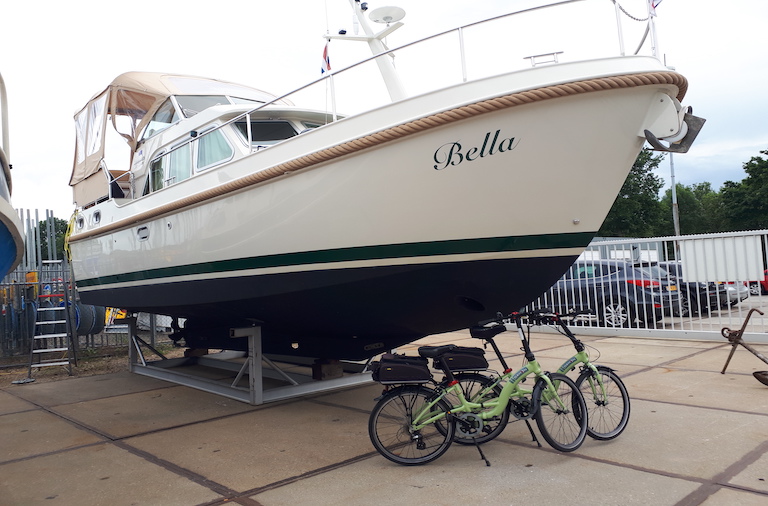 Photo: John & Kate's Boat, Bella, and their handy fold up bikes in the Netherlands

Our most favourite thing about cycling in the Netherlands, where sometimes the cycleway is larger than the roadway, even after the scenery and accessibility, is that it is very much a family thing. You have never seen so many ingenious bikes that carry kids. Parents and kids on bikes are ‘engaged’, there is conversation, and the children’s amusement is in observing life around them. They are not shut in cars and given something to distract them. They are active in their travel. We have never seen anything comparable.

Last year we were brave enough to get on our bikes in Amsterdam and join the throng. Perhaps not as adeptly as the locals, but at least there were no mishaps. Next time it’s raining and you’re looking for something to do, Google some photos or videos of cycling in Amsterdam, and kids on Dutch bikes. You’ll find it just as amazing as we do.