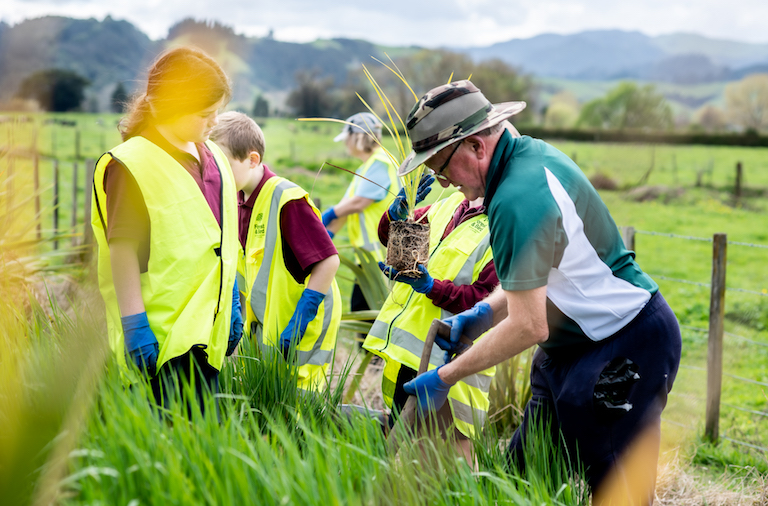 Habitat Enhancement and Landcare Partnership Waihi Inc., also known as HELP Waihi, is an incorporated society originally established by people representing the local section of Forest & Bird, Newmont Waihi Gold, and local schools. Established in 1997, the society located its base and native plant nursery in the Waihi College Farm Unit.

Projects undertaken by the society aim to improve the local natural environment of the Waihi Ecological area, and also across the Hauraki district, particularly along riverbanks, and use the help of community volunteers and schools.

Over time the society has evolved, and now has its own work team, and undertakes or supports other projects with the help of volunteers. The introduction of a permanent paid work force in recent years now sees work undertaken for a variety of Regional and District Councils.

A partnership has developed between HELP and the Hauraki Rail Trail Charitable Trust. Since 2019 HELP have raised $177,000 in their efforts to support ecological improvements on the Trail.

One of the society’s members is Warwick Buckman. We caught up with Warwick to hear more about his work and the special relationship with the Trail.

How long have you worked with HELP Waihi?

I’m one of the founding members of the society. I recall there being about 15-20 people at the initial meeting. The incorporated society was established in 1997 by a few of us representing the local section of Forest & Bird, Newmont Waihi Gold, and local schools. I was a Geographer at the school and on the Farm Unit management, and from that point I became the Chairman. A college Biologist was also involved, and also an ex teacher employed by Newmont who was working with school groups. We set up on the Farm Unit, and most of the work for the first 10 years utilised labour schemes with the Government.

What is your role, and what’s involved in your work?

I’m still Chairman. By 2007 the labour schemes had stopped and our standing out beds needed rebuilding. We activated more volunteers and since then more areas have been developed so the nursery has a capacity of holding around 25,000 plants at any one time. Since then I’ve also been the work force manager, as we now have a number of permanent paid staff - five working outdoors and two in the nursery.

The last few years the demand for plants has rocketed. In May of last year we had orders for 35,000 plants. This year’s order list is already 55,000 plants. We couldn’t just do that on our regular Tuesday morning volunteer gathering, and so there are paid workers in the nursery most of the time.

There are around 15,000 Manuka in there, and the Shadehouse which is approximately 18 x 16 metres can handle 8-9,000 plants at any one time. One new bed can take 25-35,000 plants. We’re actually small scale compared to some places, and sometimes have to outsource to larger nurseries.

What do you enjoy most about your involvement with HELP Waihi?

I’d say it’s being able to bring about change through the projects we’ve initiated. And the ability to look to a variety of organisations and councils for funding. When the Trail opened early on, I walked 3km from Cadman Road to Tirohia and counted 17 native plants, yet thousands of willow and privet. Now there’s a few thousand native plants along that section. There are Kahikatea 4m high in the wetland areas, which is changing the side of the Rail Trail. Years ago we tried to get local farmers involved but there was little interest. Now we have a few contracts with farmers and are planting their streams and gullys, which is great progress.

What is the greatest challenge you face with your projects?

Certainly finance, because there are projects we’d like to undertake but can’t. Sometimes we might spend a whole week clearing land, spraying and working, but at our own expense. The weather is also a factor. Lately there has been a string of jobs ahead of us which we can’t get cracking on because of rain.

We’re often approached via Forest & Bird who pass on people who are keen to help. We could do with more members, as some of us are ageing and less physically able than we used to be. Youngsters are good and keen, but tend to move on with jobs or families. So we don’t have them as active members for long. We had a student for work experience a few years back, to see what it’s like on a nursery and farm. He stayed with us for two years on a Tuesday morning after he left school and became part of the team. 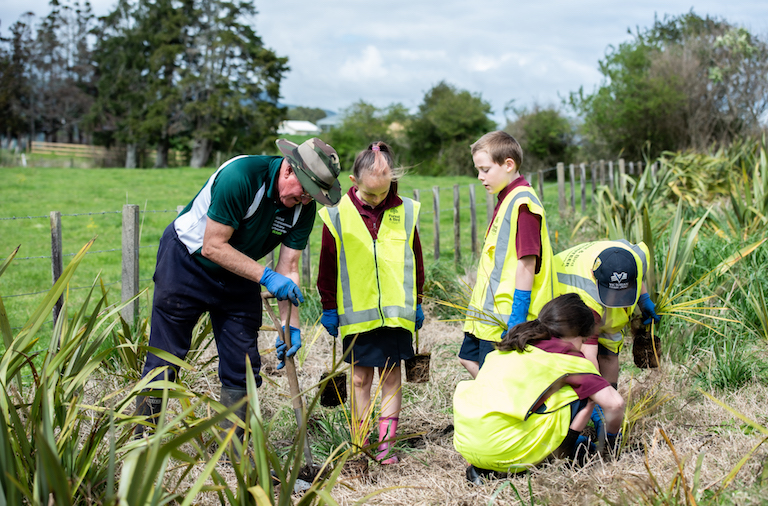 Have you enjoyed the Hauraki Rail Trail on foot or by bike?

I’ve enjoyed the Trail mostly by bike. I used to walk parts of the Karangahake Walkway through the gorge before the Trail was built. My wife and I haven’t yet cycled all of Section E from Te Aroha to Matamata, or north of Waitakaruru to Miranda. We live on the north east edge of Waihi and will often bike to Waikino, and cycle back after morning tea.

Our team meet for regular chats on Tuesday mornings to go through projects coming up. Our work on the Rail Trail is always a group effort with joint agreement, to support something we all feel is important and worthwhile to the local community.

Where are you hoping to adventure next?

We’re building a new house at the back of our section, and so that’s been a bit of an adventure in itself. We hear them hammering away and go at the end of the day to see what’s changed. We’d like to do the Motu Trails in Opotiki, as I haven’t cycled from Motu village through to the coast. I’ve done the Timber Trail with my daughter, but now my wife and I have e-bikes we’d like to do it together. We’ve ridden parts of all of the Great Rides over the years. Sometimes we’ll take the car and cycle out and back, and other times book a shuttle.

If you would like to volunteer, you can get in touch with HELP Waihi here.