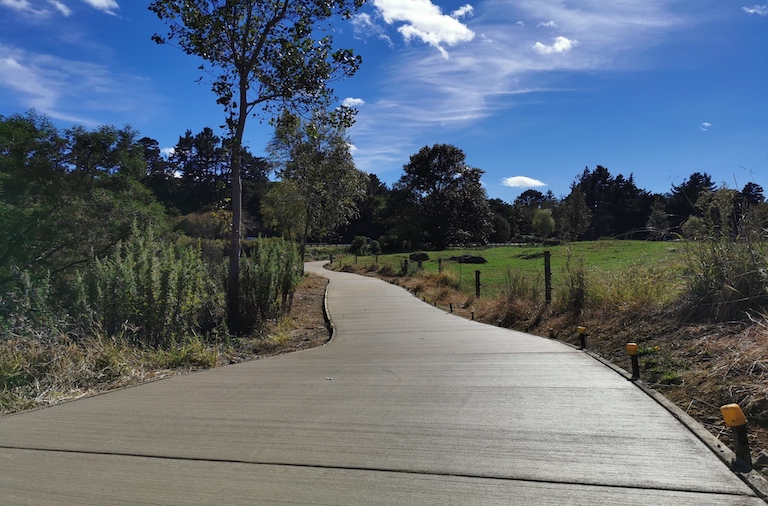 Following the flooding in June 2021, $300,000 of funding from the Ministry of Business, Innovation and Employment was made available to the Hauraki Rail Trail to undertake concrete works between Waikino and Waihi along Section C of the Trail. The work was carried out across a four-month period, making the most of the settled weather.

Six short sections of the Trail, ranging from 60 to 250 metres long have been laid at Pippa’s Corner, the area known as Queen’s Head, the weir and at the dredging plant. 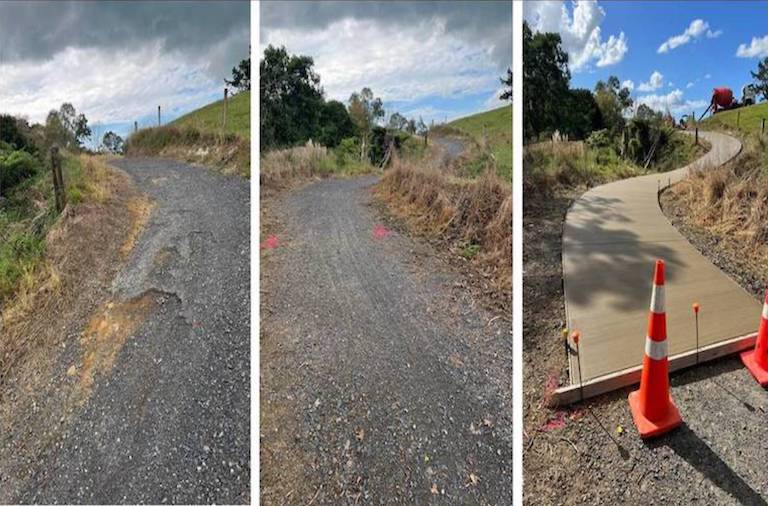 Photo: The Weir Concrete Pour - Before and After.

The new sections of concrete provide the Trail with a longer-term solution to on-going maintenance and repair issues following significant rain events which cause repeated damage and closure of the Trail. 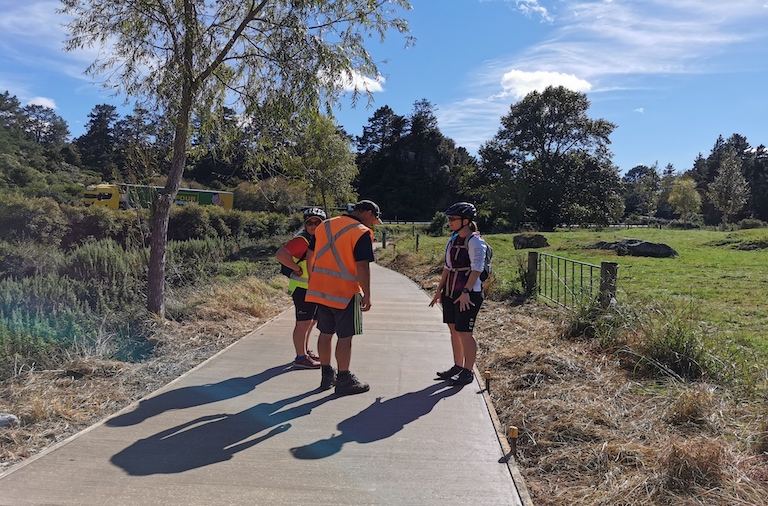 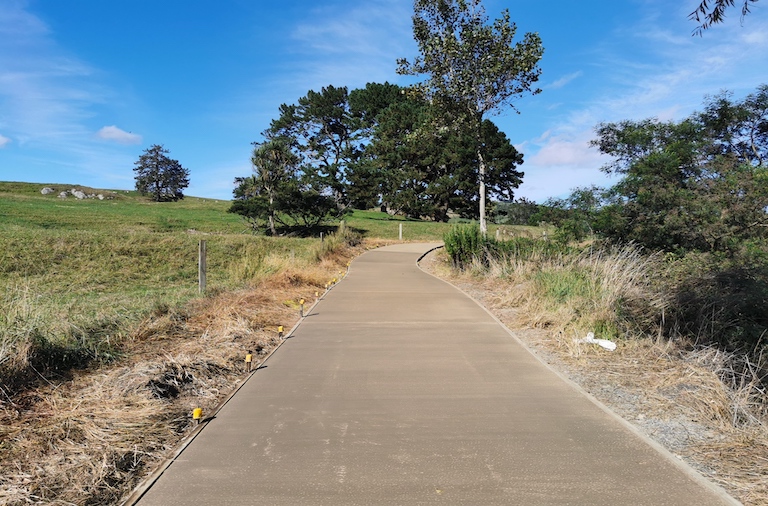 At Pippa’s Corner, the gradient of the Trail was also raised slightly, making it safer for users. Additional work was carried out to repair surface damage that occurred, including scouring, large exposed rocks and tree roots. 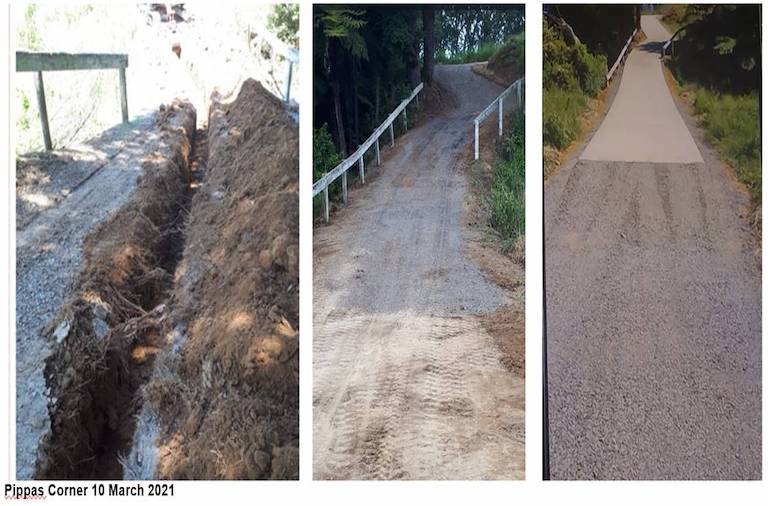 Photo: Pippa's Corner concrete works - Before and After.

In addition to these improvements through the Gorge the much anticipated extension to Waihi commenced in early March. The route runs from the bottom of Wellington Street, around to Riverbank Terrace, and along to Gilmour Reserve.

The scenic extension of the Trail will continue from the existing end of the Trail at Goldfields Railway, to the central business area of Waihi, following the Ōhinemuri River. The project was highlighted in the Council’s Long Term Plan and has been largely supported by the Waihi community. 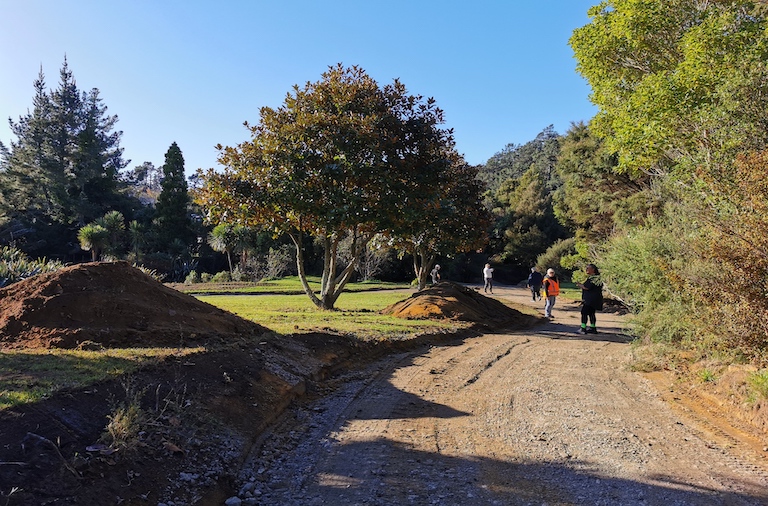 Anne Marie Spicer, Councillor and Chair of Waihi Ward says, “Extending the route from Goldfields Railway into Waihi town via the beautiful Ōhinemuri River will make the route clear and safer for cyclists to find their way to the boutique shopping, cafes and bakeries on offer in the CBD as well as our Museum and Gold Discovery Centre.”

Feedback was sought on a proposed scenic route into Waihi for the Hauraki Rail Trail, from the Goldfields Railway station along the Ōhinemuri River during the Council’s Long Term Plan consultation. The existing trail follows Wrigley Street and Parry Palm Avenue into Waihi CBD. There are plans to improve this existing route for safety, dependent on decisions from Waka Kotahi NZ Transport Agency. 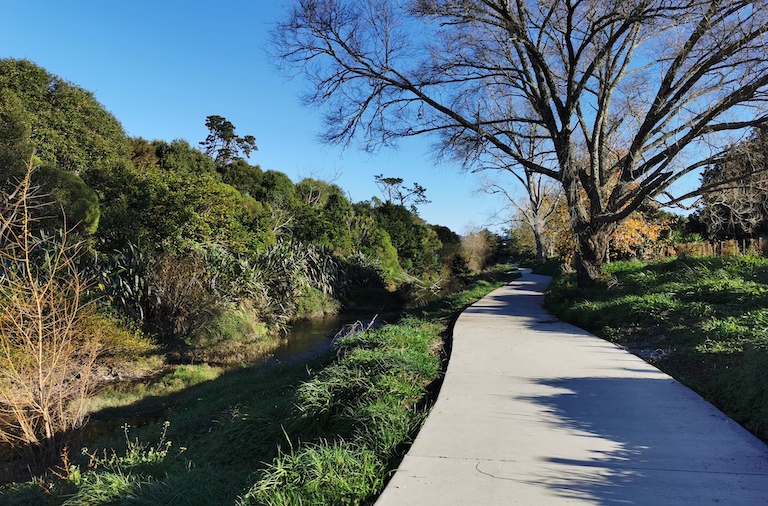 During the public feedback process, 72% of respondents wanted to build a new scenic route along the river, while 28% wanted nothing. After considering the feedback, the Council decided to develop a second, more scenic route into Waihi. The new route will link nicely to the rest of the Hauraki Rail Trail along the Ōhinemuri River and provide visitors with a picturesque ride into Waihi.

In the future, this scenic route could also link to the Waihi to Waihi Beach Trail, if the Western Bay of Plenty District Council progresses the trail to Waihi Beach. $1.47 million has been budgeted for the extension project in 2021/22, and has been paid for by the Waihi Ward ratepayers.